End violence for our daughters 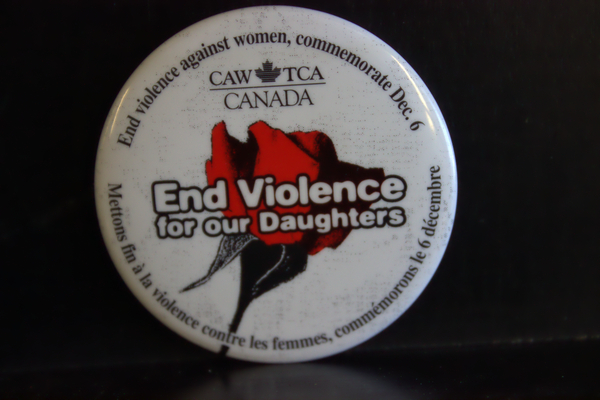 On December 6, 1989, 13 female engineering students and one female staff member were shot to death at l’École Polytechnique in Montreal. The women were specifically targeted as the shooter, Marc Lepine, separated the female students from the male students. Lepine wrote an anti-feminist suicide note in which he blamed the female students for him not being accepted into the engineering program. In response to this act of violence against women the Canadian Auto Workers Association created this button. They used the red rose featured on a button created by the Canadian federal government. 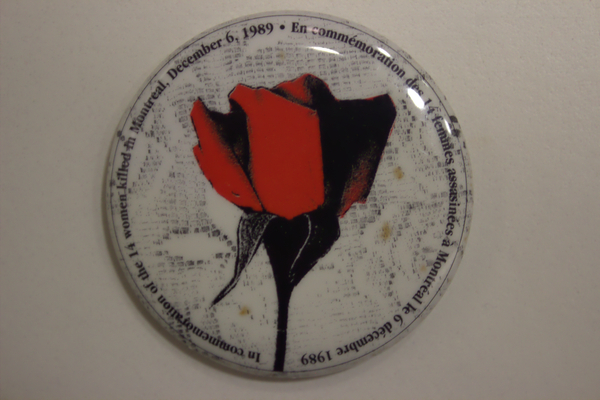 Jean Augustine discusses the End violence for our daughters button.

TRANSCRIPT
Some of the buttons that I collected were really messages that I wanted to give, and some of the buttons I wore because I wanted to participate in the strong message. Um, this was—this series you have here, uh—Violence Against Women, I think came after the December the 6th killing where Lépine gone into the Polytechnique and just shot these engineering women students, and so this was put up by the CAW: “End Violence Against Women”. And December the 6th was the date at which that happened. So that was a focus on ending. And one of the things that came up, and you can see it on both buttons. This one was struck in commemoration of the killing in 1989—December 6th, 1989. And what happened after the killing was these red roses were held up in memory of the young women and um, in front—I was president or chair of the Women’s Caucus in Parliament. And what we would do is have a table in front of the parliament and we would put the red roses, almost(?) symbolic and in commemoration and in remembrance of the women. So notice here you have the red rose which everyone acknowledges and all kinds of buttons were made in remembrance of these 14 women in Montreal; December 6th, 1989. And notice how the CAW, the union took the same motif, the same rose and End Violence for our Daughters imposed on it.