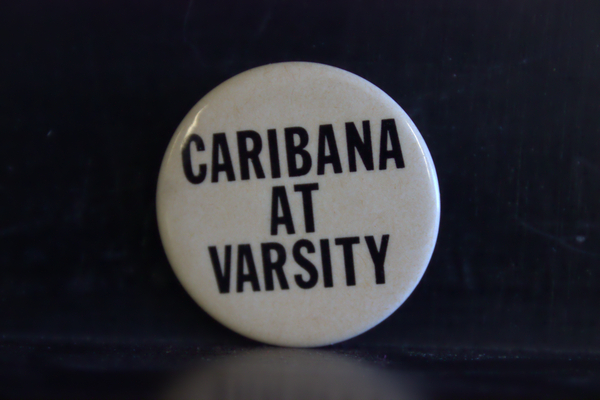 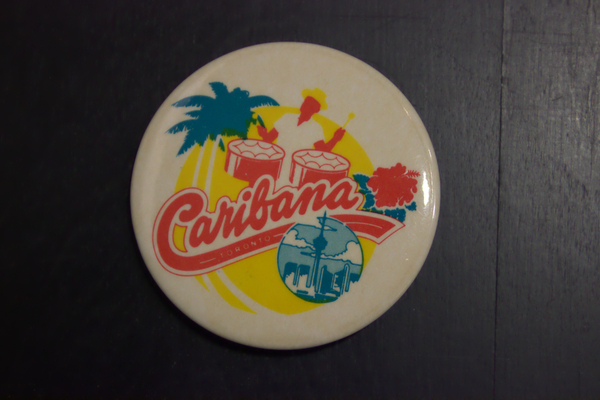 Caribana grew out of the earlier Calypso Carnival festival initiated by the Canadian Negro Women Association (CANEWA) in 1956 until 1964. The first Caribana (1967) festival was a week-long celebration of Caribbean culture organized by Toronto’s Caribbean community as part of Canada’s centennial celebrations (1867-1967). Charles Roach was a founding member of the group, but Verda Cook, previous president of CANEWA served on the board of directors for the first Caribana. The first parade started at Varsity stadium on the University of Toronto campus (downtown Toronto). The “Caribana at Varsity” buttons were given to participants to remind them of the location of the parade.

Other events (such as a cricket match, music and comedic performances, fashion show) were located on Centre Island. Admission to the 1967 festival was 50 cents for adults and 25 cents for children. The second colourful button was a later design for Caribana.

TRANSCRIPT
Caribana At Varsity, this is an interesting one. This was 1967, because as you know Caribana started as a result of the community’s enthusiasm to celebrate the 100th anniversary of Canada, the constitution of Canada in 1967. And the parade started at Varsity Stadium and then we went from Varsity stadium to University, down at University Avenue, etc. So these were buttons that we had prior to get people to assemble at Varsity. So this is where it’s going to be, be part of this new thing, this Caribana thing, be at Varsity. And Varsity is really the stadium [at] University of Toronto on Bloor Street and University.

And of course, this was a Caribana button, and I think they still make buttons each year but there would be different ones. I’m not too sure what year this is, but this would’ve been the early one because here is the CN tower, they were trying to put the steel band which is part of the Caribana, and of course the palm tree and the CN tower and the connecting up of our presence in Toronto. 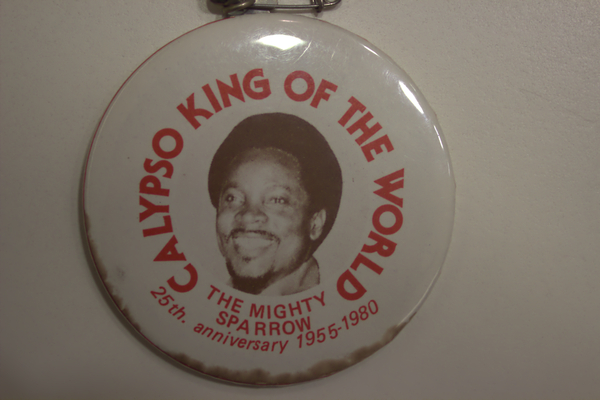 The Mighty Sparrow, born Slinger Francisco in Grenada, is a popular calypso performer. He grew up in Trinidad and Tobago where the Caribbean Carnival originated.  He has been a regular performer at Toronto’s Caribana festival and has been crowned Calypso Monarch eleven times (starting in 1956 in Trinidad).

Jean Augustine discussess the Calypso King of the World button.

TRANSCRIPT
Alright, well it seems to me focus is more on Caribbean culture as we showed it to Canadians. And so the Calypso king of the world which was The Mighty Sparrow, and here again the 25th anniversary, 1955-1980, and of course in some of the early Caribana, he was always invited to Toronto and performed during the Caribana time and different occasions. And he would be well known by everyone who follows the calypso tradition and know about Caribbean music, Caribbean art, genre of calypso, etc. he’s known as the King.