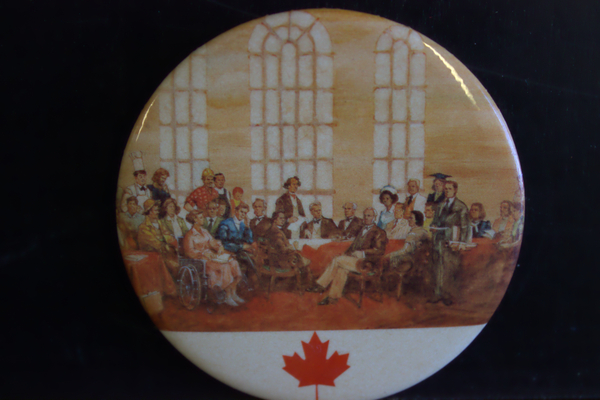 The producer of this button is unknown, but it was likely produced by a Canadian federal government department or agency. The button represents the pluralism and diversity of Canadian society. A tableau from the famous painting “Fathers of Confederation” appears with several men posed around a table, including John A. MacDonald, Canada’s first prime minister. The original 19th century painting of the “Fathers of Confederation” by Robert Harris was destroyed in 1916 in a fire to Ottawa’s Parliament building. In 1964, Rex Woods later made a copy of the original painting. The Fathers of Confederation painting is a composite of delegates at the Charlottetown Conference (September 1864) and the Quebec City Conference (October 1864).  The painting represents the union of British North America (New Brunswick, and Nova Scotia) and the Province of Canada (Ontario and Quebec) to form the Dominion of Canada. Although representatives from Newfoundland and Prince Edward Island were present at the meetings, these colonies as well as the North-West Territory (joined July 15, 1870), British Columbia (joined July 20 1870),  did not initially join the Dominion.Prince Edward Island would eventually join on July 1 1873 and Newfoundland on March 31, 1949. The original painting provides only images of White (of British and French origin) men, however this button incorporates images of females, a person in a wheelchair and people of colour into the original Fathers of Confederation scene. This button represents the plurality of Canadian society as well as social inclusion of people with disabilities, women and people of colour.

And of course this is Canadians from All Walks of Life. And I think it's a little bit of a mock to the men, who sat around the table to sign, but here you have age and gender and disability and everyone coming around the table together and the message is that we're all Canadians.