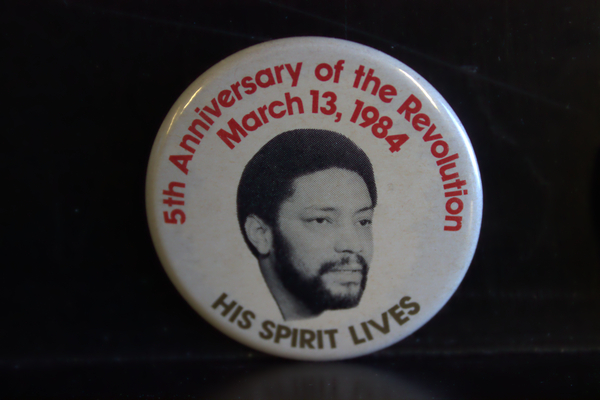 On March 13, 1979, Maurice Bishop, leader of the New Jewel Movement, led a coup against the Grenadian government while Premier Eric Gairy was abroad. He formed the People’s Revolutionary Government (PRG) and declared himself Prime Minister. Maurice Bishop, a Marxist, was a popular leader. With large support from Cuban leader Fidel Castro and a coalition of other countries (including Canada), Bishop built the first international airport at Point Salines, Grenada.  He was later assassinated in a 1983 coup before the United States intervened. Grenada’s airport was later renamed the Maurice Bishop International Airport in 2009.

TRANSCRIPT
Maurice Bishop, the Fifth Anniversary of the Revolution, March the 13th, 1984. The Spirit Lives. This is Grenada politics. And you know they had a revolution there when the opposition decided that they would become the government and then whatever happened in the end where Maurice Bishop got killed. I was in Canada at the time, but there were lots of supporters of Maurice Bishop here, Grenadians in the Diaspora. And so I think these buttons were circulating.