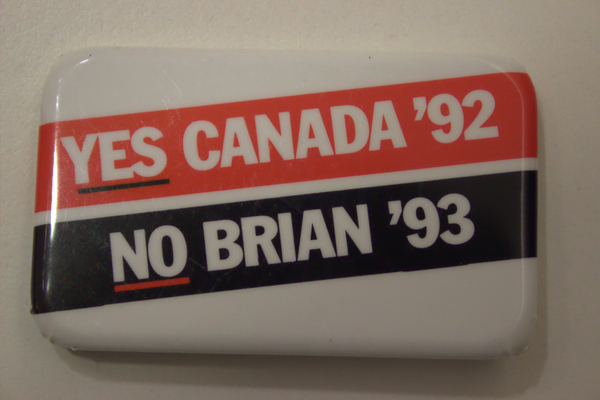 The creator of this button is unknown, but the button’s “Yes Canada ‘92” may refer to the 1992 Canadian constitutional referendum and the subsequent 1993 Canadian federal election. On October 26, 1992, a referendum was held across Canada on the proposed constitutional amendments known as the Charlottetown Accord. The agreement recognized Quebec as a distinct society, and granted aboriginal self-government, among other changes.  Canadians were asked:

“DO you agree that the Constitution of Canada should be renewed on the basis of the agreement reached on August 28, 1992?”

A national YES Committee was struck to encourage Canadians to vote yes to the Charlottetown Accord in the 1992 referendum. The National Action Committee on the Status of Women opposed the proposed constitutional reforms.

The “No Brian” part of the slogan might refer to sentiments expressed against Prime Minister Brian Mulroney and his Conservative government preceeding the 1993 federal election. Brian Mulroney’s popularity suffered after the failure of the Charlottetown Accord coupled with high rates of unemployment, a recession and the introduction of the "temporary" Goods and Services Tax (GST in 1991). According to the polls, Mulroney’s popularity was the lowest of any other Prime Minister in the history of Canada. Mulroney resigned as Prime Minister in 1993 and Kim Campbell was subsequently elected leader of the Progressive Conservative Party and Canada’s first female prime minister. An election was called for October 25, 1993.  In October 1993, Jean Chretien, leader of the Liberal party, was elected Prime Minister of Canada. The Conservative party only won two seats in the House of Commons. Jean Augustine was one of the newly elected Member of Parliament.

TRANSCRIPT
Yes Canada 92, No Brian in 93. What would this be now? We had several campaigns when Quebec was making its push for separation, and so this was saying Yes to Canada, stay in Canada. And I'm not too sure what-- Brian is Brian Mulroney and Brian Mulroney in 93, I'm not too sure. Maybe no vote for Brian in 93 because the big election was in 93 and that's where the Conservatives lost all but two seats in the house and the Liberals picked up with Jean Chretien, that was the year I was elected. So it seems to me this has something to do with Quebec separation.