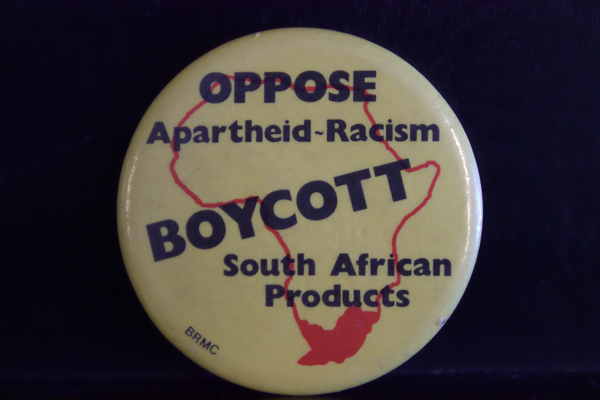 During the 1980s, the anti-apartheid movement in Canada was strong. The Canadian Black community, as well as other human rights groups (such as the Canadians Concerned with Southern Africa (CCSA) and the Anti-apartheid Coalition of Toronto), mobilized to protest the oppression of the Black majority in South Africa. During the 1980s, activists pressured the Canadian government, under Mulroney, to sanction and divest from South Africa. Buttons were created for conscious-building campaigns, conferences and protests. The boycott of South African products was urged. Activists picketed establishments such as the LCBO and Loblaws to protest the selling of South African products. Jean Augustine discusses her participation in the anti-apartheid movement.

TRANSCRIPT
“Speak Out, South Africa Will Hear Us” and again it’s all the calls that were made across Canada and the people who were out there encouraging people not to participate in this regime; to speak up to have their voices heard. There were label groups, there were church groups, there were religious people, there were community organizations, um, we had several marches, we had several demonstrations, we had several boycotts. I remember being um, was it a Loblaws store um, you know that had the oranges and whatnot and telling people, showing people the bag, the kind of orange, look for what the name was and you should not buy that kind of orange. And then some people even being bolder, going into the store and standing by the out span oranges and as people were picking it up saying, “did you know that these oranges are supporting…” and you know, same with the wine, “did you know that this is a South African wine and by buying it you…” So there were all kinds of boycott. I participated in a number of them. A number of the demonstrations, the boycotts, letter writing, the seminars, the speakers that we would invite to come and talk about the situation in South Africa, the situation of South Africans. And uh, this is again another button that was very much out there; opposed apartheid, opposed racism, boycott South African products, and again, the map to show exactly where South Africa is on the continent. 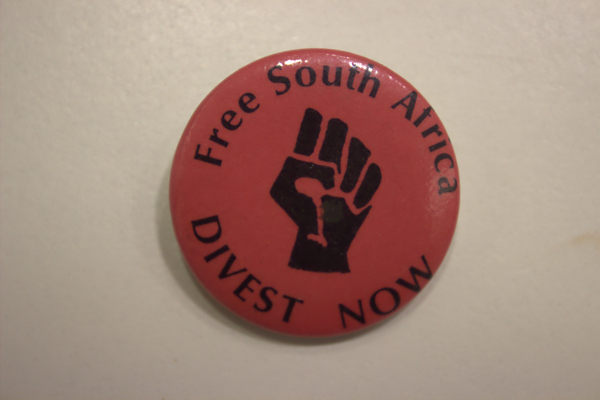 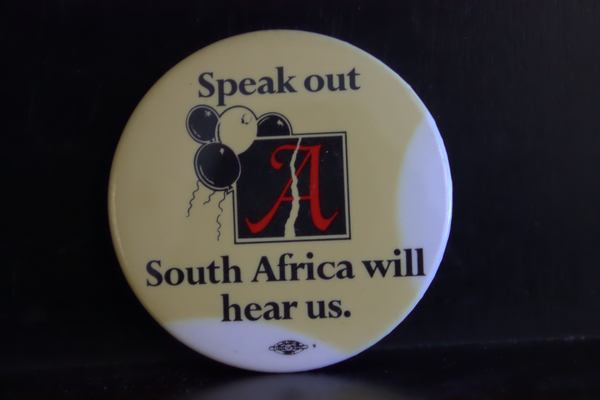 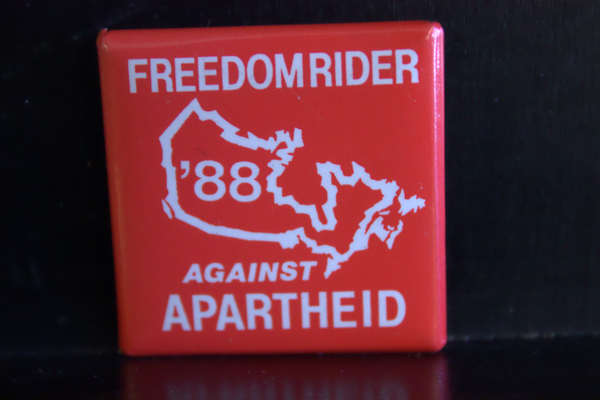 The term “Freedom Rider” relates to the 1960s Freedom Riders who protested racial segregation in the American South. This group of Black and White volunteers rode in chartered buses across southern states in opposition to the segregation laws, among which prohibited Blacks and Whites from sitting together on a bus. These civil rights activists were often arrested or beaten by white Southerners.

TRANSCRIPT
Okay, Freedom Rider 88 against Apartheid. Well as you know, in Canada we were very much in that situation against apartheid, to bring down apartheid. We know the work that was done by our prime minister at the time and of our minister of the time. And in 1988 you can see the struggle here against apartheid. The call for us was really pronouncing this button: Free South Africa and that is divest because the issue was that as long as we continue to invest in South Africa and buy their wine and buy their oranges and invest in the markets and the industries that were not free in South Africa and South Africans. So that again was very—that is one of the buttons I wore.