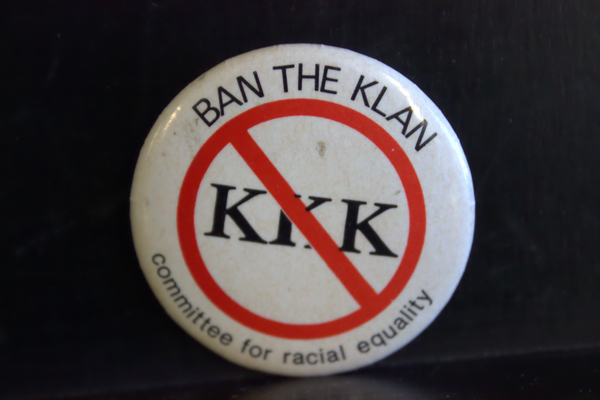 It has been reported that the Ku Klux Klan (KKK) has been in Canada as early as 1924. During the early 1980s the KKK, a white supremacist group, was actively recruiting members in Ontario, including in high schools. In April 1980, David Duke, a KKK leader, was arrested by Canadian immigration official and subsequently deported, after being a guest speaker on a local Toronto radio talk show. A KKK Toronto office was later opened in June 1980. Various human rights groups and those representing multiracial populations were divided on whether the KKK should be barred from conducting membership drives in Ontario. At stake was the issue of freedom of expression. The Committee for Racial Equality, who produced this button, was one such group who believed that the KKK should be banned.

In the 1981 issue of Pulse, the quarterly newsletter of the National Black Coalition of Canada (NBCC), the following policy statement regarding the KKK was issued:

“Cognizant with freedom of speech and freedom of assembly, we will seek the application of all legal remedies to prevent overt racist actions by the Klan, which are contrary to the best interests of Blacks in Canada.

We are not ignoring the threat they constitute, but, we do not regard the Klan as, much of a threat as the more gentlemanly and often clandestine racist activities of those who dare not be as blatant in their racism.

The Klan however, does represent to Black people in Canada, a convenient clarion call to arm its organizations for the fight against bigotry. We must combat discrimination and racism wherever it is found, be it in employment, education, law enforcement, or media, indeed, in all facets of society.” (National Black Coalition of Canada, 1981, p. 4)

TRANSCRIPT
And one of the things sometimes that we forget, is the fact that every so often, we have in various Ontario communities, the Ku Klux Klan would come and infiltrate, put posters out or do different things. And so this was "Ban the Klan, Comity for Racial Equality", and I think it was in-- I don't remember the name of the small town, but they had come into the town with leaflets and pamphlets speaking out against people in the community. And so these buttons were struck.