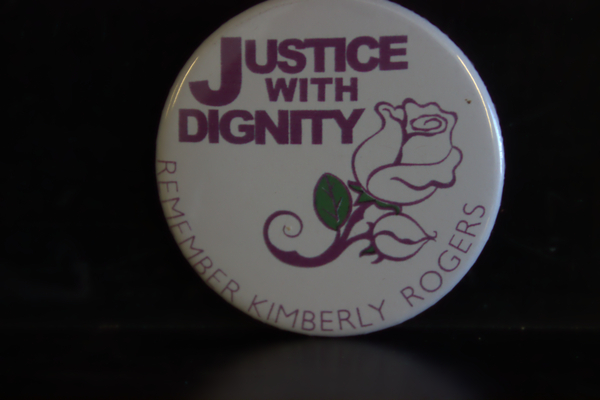 Kimberly Rogers committed suicide in August 2001 while under house arrest for welfare fraud in an overheated apartment. Rogers was pregnant at the time and living in Sudbury, Ontario. She was arrested for having undeclared income ($49,000) from her student loans while on welfare. She was sentenced to six months of house arrest and was ordered to repay welfare money that she received. Due to her conviction on welfare fraud charges, she had a lifetime ban on receiving welfare benefits. House arrest prevented her from working and earning money and Rogers was severely depressed. An inquest into her death made fourteen recommendations, including the elimination of the lifetime ban on those convicted of welfare fraud. Despite resisting initially, the Ontario government (under Premier Dalton McGuinty), eliminated the lifetime ban for those convicted of welfare fraud.

A campaign, “Justice with Dignity”, was organized by a coalition of various organizations (including Elizabeth Fry Society, the John Howard Society and the YWCA) to protest the harsh welfare policies under the Progressive Conservative government that contributed to Roger’s death. The white rose was used as the campaign image.  The campaign urged the government to re-examine social assistance policies and to increase the social assistance payments to align with the actual cost of living.

This button was pinned on Augustine's display of political buttons by a constituent.