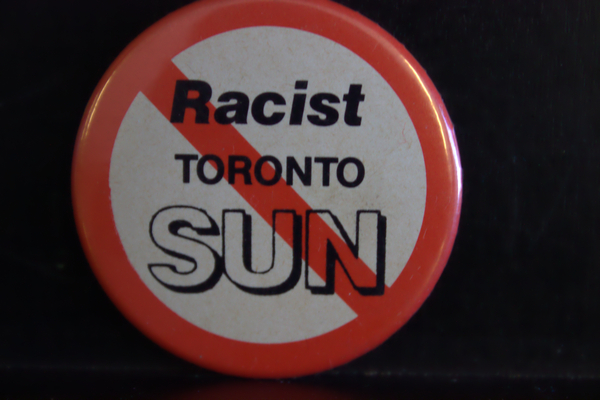 On December 6, 1985, the Urban Alliance on Race Relations released the report Power without responsibility: the press we don’t deserve: a qualitative content analysis. According to the report, the study “was undertaken to respond to concerns expressed by members of the community that the Toronto Sun newspaper consistently presented a prejudiced and racist orientation toward racial and ethnic minorities” (Ginzberg, p.i ). The report analyzed the content of The Toronto Sun, a tabloid newspaper, from January 1975 to October 1985. It concluded that there was a “sheer volume of racial stereotypes, racism, scapegoating, and the presence of statements that may elicit fear and hatred against racial minorities” (p. i).

Various racial community groups were outraged by the Toronto Sun’s portrayal of minorities during this period. A letter writing campaign ensued and boycott of the Toronto Sun was urged. The Urban Alliance on Race Relations also urged the City of Toronto to stop advertising in the Toronto Sun. In 1986, a complaint to the Ontario Press Council by the Anti-Apartheid Coalition of Toronto was dismissed. Paul Godfrey, the publisher of the Toronto Sun at the time, denied the allegations and accused the committee of censoring the newspaper.

TRANSCRIPT
And of course this was a big-- I think our memories have gone now past the recollections around the Toronto Sun, and the writers and all the people who are writing all kinds of things that were considered to be prejudicial, to be racist and to create or to have stories that created a lot of tension in the community. And so the Toronto Sun was always viewed as a racist paper. There are still a lot of people who don't read The Sun because of that past history. We know some of the people had gone, we know the Sun has had different editorial positions now, but there was a time when the Sun was really a cause of concern for people in not only the black community but people in the sidelines of society. It was in the 70s, the 80s. It was not so much the kinds of stories, it was really the tone of the stories, the descriptors that would be used-- like the words that would be used to describe individuals and also the hard line positions that were put forward in terms of race. So for example the story would be, you know, why should we have to do employment equity? There'd be all kinds of viewpoints around that, or in the case of the police shootings and the marches and things that were happening, how it was reported. Or in the instance of things that were happening in public housing, how that was reported versus how something was reported if it happened in another part of town. So there were lots of-- the Toronto Sun, people were writing, demonstrating, passing out buttons, doing all kinds of things.