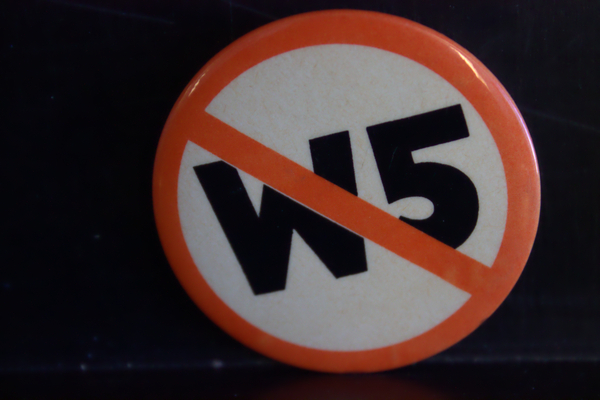 The W5, is an investigative Canadian television program (hence the 5 Ws of journalism: Who, what, where, when and why). On September 30, 1979 the W5 program aired a controversial segment titled “Campus Giveaway”. In the program, the narrator, Helen Hutchinson, states:

“Here is a scenario that would make a great many people in this country angry and resentful. Suppose your son and daughter wanted to be an engineer, or a doctor or a pharmacist. Suppose he had high marks in high school, and that you could pay the tuition . . . but he still couldn't get into university in his chosen courses because a foreign student was taking his place. Well, that is exactly what is happening in this country.” (Campus Giveaway, W5 program, September 30, 1979 transcript as cited in Beddoes, D. 1980, p. 8, Globe and Mail)

TRANSCRIPT
Oh, the W5, I was speaking about the W5 only yesterday. I was talking about the W5. W5 was a program on television and it was what, when, where, why, you know, the media, but what they did was a program that insinuated, not insinuated, that gave the research and the stats that showed that in medical schools and in research I think that you had-- that Asian students, the impression they gave was that medical schools were overrun by Asian students and almost implying that Canadian students weren't able to get in because the Chinese and the other Asian students were taking all the place in medical school. And so the program was very explosive, and the community reacted really, really, very badly at the way in which Asian students were portrayed and the whole notion about the presence of Asian students in medical schools. So there were marches, there were demonstrations, there were protests both at the station and at the university. And there were conferences and there were discussions about that whole issue. And so these buttons were struck, they were part of the fundraising for the campaign. I was talking about that just the other night because again, there's a lot of discussion now around the universities and colleges going out to Asia and places and setting up satellite and encouraging and now with the foreign-- with those students and now through immigration policies are allowed to stay and the discussion around the composition of classes would be something that-- the folks I was talking to were talking about this and I kind of referred them to this whole issues of the W5. You have to be careful how we approach the issue or speak about the issue. I think at the end, I'm not too sure if there was so much of an apology as it was some way in which they did another program that counteracted the program that they held before. It would've been in the 80s. The reason that most of these things are in the 80s because once I got into politics, a lot of these protest, marches and whatnot, I didn't participate in those things. It was no to the W5 program that discriminated.