A date with equality 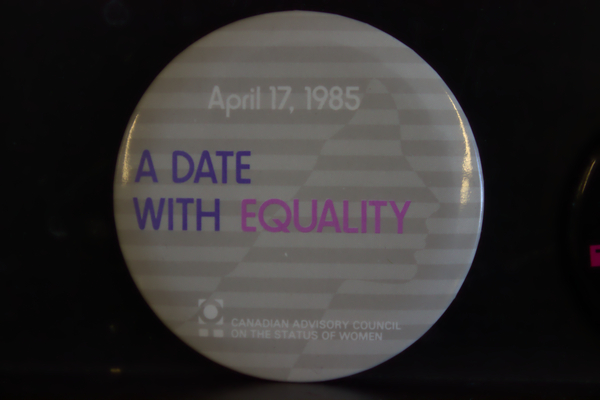 Section 15 , Equality before and under law and equal protection and benefit of law of the Canadian Charter of Rights and Freedoms  (1982) states:
“(1) Every individual is equal before and under the law and has the right to the equal protection and equal benefit of the law without discrimination and, in particular, without discrimination based on race, national or ethnic origin, colour, religion, sex, age or mental or physical disability.”

Feminist and gender equality organizations (including the Ad Hoc Committee on Canadian Women on the Constitution) lobbied for equality rights provision in the Charter. They presented suggestions for changes to the Charter of Rights and Freedoms proposal.  Section 28 guaranteeing equal rights to both men and women, was in jeopardy of being excluded since it was felt that section 15 already addressed non-discrimination based on sex. Women activists were concerned that provincial legislatures could override section 28 of the Charter of Rights.

Although the Canadian Charter of Rights and Freedoms was created in 1982, the equality rights protection guaranteed in section 15 did not come into force until April 17, 1985. The federal government wanted to give the provincial and territorial legislatures enough time to review and update their own laws to harmonize with the Charter. Gender equality rights groups eagerly awaited and celebrated the April 17, 1985 date.

Jean Augustine was a member of the Canadian Advisory Council on the Status of Women when the council issued 1000 of the “A DATE WITH EQUALITY” buttons in celebration.

TRANSCRIPT
Okay, I think a number of these seems to me comes from women organizations. I’ll start with this one first: um, I was a member of the Canadian Advisory Council on the Status Women and I was appointed by Prime Minister Trudeau to sit on the Status of Women; the Canadian Advisory Council. And we dealt with a whole series of issues that pertained to—or we advised and have met on a whole series of issues for gender equality, for women’s equality, for women’s inclusion in every aspect of not only law but in every aspect of the society. And so I think this was a special focus on April the 17th, 1985 which was a specific, what we called, “a date with equality”. So at the bottom here you can see in small print who did this, the Canadian Advisory Council on the Status of Women and I was on the council at that time. 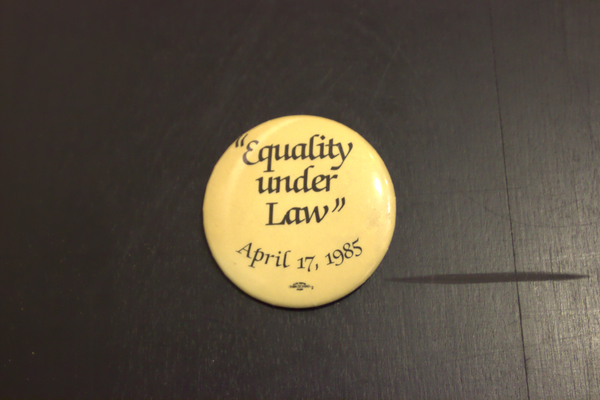 The creator of “Equality under law/ April 17, 1985” is unknown, but might have been a grassroots organization that created them.