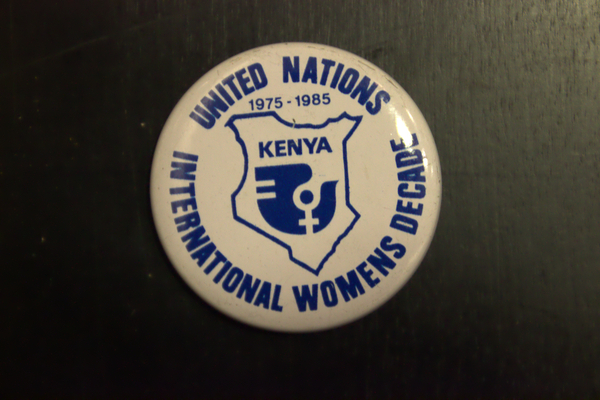 The objectives of the first conference were “to promote equality between men and women, to ensure the full integration of women in the total development effort and to promote women’s contribution to the development of friendly relations and co-operation among States and to the strengthening of world peace” (United Nations GA A/RES/3520).  This button is from the 3rd conference in Nairobi, Kenya.

TRANSCRIPT
United Nations 1975-1985, um the International Women’s Decade. As you know, the first UN Conference the women was 75 in Mexico City and for the first time the UN brought women together to discuss the situation of women around the world because of the fact that so much came out on the table about women’s lives. Women owned about 95% of the world, women on 1% of the property, women’s lives were, you know, the situation of women’s lives. So as a result of all that came out in 1995, governments were unsure of how to move and UN said “okay, we’ll give you 10 more years and in 10 years, gender equality we should reach some sort of equity.” And 1975 was in Mexico City and 1985 was in Nairobi. Uh, in 1975 we have Kay Livingstorn who was really, we called a founding member of the Congress of Black Women of Canada. She was at the 1975 conference, she was in the preparatory work for the conference. Um, and I went to the conference in Nairobi, in Kenya in 1985 together with people like Glenda Sims and Karen Braithwaite and Eva Smith that Eva’s initiative is named after. And a whole group of us participated in the whole women’s conference in Nairobi and we stayed n Africa and toured in Africa after that. But if you can see this here is the shield of the map of Kenya, you can see the Status of Women logo and you can see the symbol that says women; the circle with the cross at the bottom. So I think I picked this up in Kenya at that conference; the International. women’s conference in Nairobi, 1985. 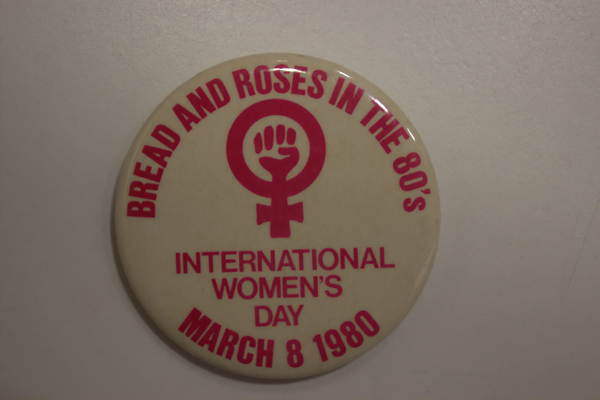 International Women’s Day (IWD) was first celebrated on March 19, 1911 in Austria, Denmark, Germany and Switzerland (UN Women, 2012). It was not until 1975, during International Women’s Year, that the United Nations began celebrating IWD on March 8. It is thought that March 8th was selected to commemorate the first strike by female textile and garment workers in 1857 .The slogan “Bread and Roses” was used by strikers, mostly women, in 1912 for equal pay (bread) and better working conditions (roses). The slogan was inspired by James Oppenheim’s poem “Bread and Roses”; particularly the quote: “Hearts starve as well as bodies: Give us Bread, but give us Roses”.  In the mid-70s Oppenheim’s poem was later transformed into the song “Bread and Roses”. Sung by Mimi Farina, the song later became a popular anthem for women’s rights group.

Jean Augustine discusses the Bread and Roses in the 80s button.

TRANSCRIPT
This is again, 1980, International Women’s Day. The whole notion, you know the notion of bread and roses? And the notion of bread and roses speaks to those who have and those who are struggling, you know, and the difficulties that there are for people. And so again, a symbol of women and marking International Women’s Day, March the 8th, 1980. There’s a theme each year that the community picks up and I think this is the theme. Usually the women’s community or the women’s organization in Canada in various cities there are marches, there are concerts, all kind of events marking International. women’s day. And there’s always a theme around the women organization—I wouldn’t be surprised if this was a labour union um, aspect to this button. 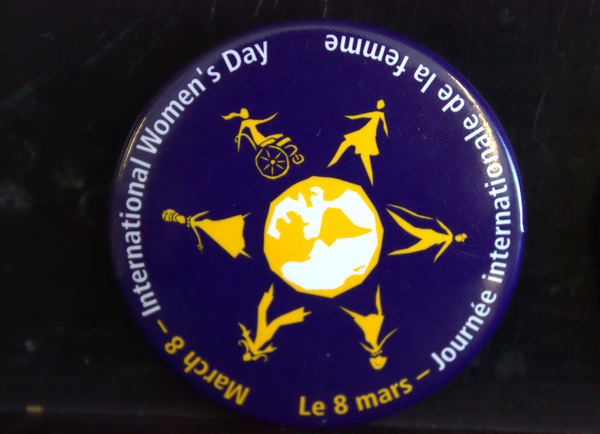 This is a more recent (perhaps from the 1990s) button for International Women’s Day.

TRANSCRIPT
This is a government one; International Women’s Day. And again, Journe de Nationale--  and it shows women here in different roles and I think it was focused on women in the Americas. If you notice the South America and North America in the middle, the globe. And then all the activities that women are involved in, you can see in this circle, so again, March the 8th which is International. Women’s Day, so that was a button that was struck for that.