Item consists of a letter written by Richard Palmer to his friend John Watt Lennox. Both pilots in the Allied Forces, Palmer's letter has been photocopied and reduced for ease of transport.

Congratulations son, on your promotion. The folks at home wrote and told me about it and sent along the clipping as well from the Toronto Globe. That was really good news, and the kind I like to get. Since I donâ€™t know your new numbers Iâ€™m taking a chance on your old one until such time as another letter from you filters through. Thereâ€™s only one other bit of news Iâ€™d sooner have had and that was the information that I was going home on the next boat. What a hope Iâ€™ve got! Anyway, look after yourself boy, and donâ€™t let the females mob you in that new uniform. As Cal could say, youâ€™d better carry a short length of lead pipe to defend yourself. As you may note from my address, at least I am an F/O six months backdated. Be seeing you one of these years. 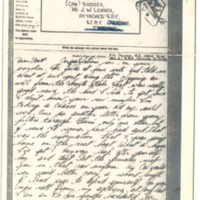