Photo of Domingos Marques sitting at a table in the workshop of O Jornal Portugues newspaper.
Transcript of audio commentary:
"This was, I would say the spring of 1970, perhaps even before... that's right, maybe the winter of 1968. I had just arrived in Canada in the summer and then after a couple of months in a job that I was sent to, I believe was Leamington or around that area, picking tomatoes, this was really my first job in the city. I was hired because of my involvement in the church, with the Youth Group of St. Mary's. Fr. Cunha gave me the job in the newspaper that he was running at that time, O Jornal Português. The picture just shows how basic it was at that time to run a newspaper, in terms of the equipment used, preparing the newspaper for printing. There was very little, just an IBM typewriter that prepared the text and could justify the columns to be pasted down, preparing the pages; and the Varityper, which was another simple basic machine, would print the titles, so you could have headings for the titles of the stories and basic text. So what we had to do was use a pair of scissors, cut the text from wherever was available; and most of it, in those days, was taken from other newspapers. If a newspaper like this one, competing with Correio Português, which was the other newspaper already in existence... they would get newspapers that arrived from Portugal, maybe a week old, or maybe two or three days old, and we would cut the selection of the news that would interest the Portuguese, according to the editor. Fr. Cunha obviously was in charge but he had an editor, um redactor, Fernando Pedrosa. So my job, in this particular situation was writing local stories. So I remember, for example, if there was a espetáculo de artistas vindos de Portugal I would be the person going there; or writing [about] social events in the church, [or] whatever else was happening in the First Portuguese Club... there were very few associations at that time. What is interesting about this picture, when I look at it is seeing uma mesa tão tosca, very, very basic piece of furniture; um lápis, ou uma caneta and papel [for] writing the stories and then, you know... we can see in the background an IBM basic typewriter where the items would be typed and the large tables where the layout would be set up for the printing." Domingos Marques, interviewed by Gilberto Fernandes and Susana Miranda, October 2008. 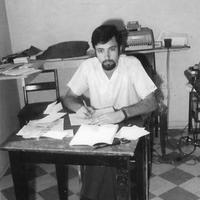