As was announced by the Canadian media, a group of about 12,000 people from the Portuguese community in Toronto marched through the streets of Toronto on August the 8th, protesting the death of Emanuel Jaques who was found wrapped in a green garbage bag on the roof of a Yonge Street sex shop on August 1st. This tragedy shocked the whole of Toronto and Canada. We, the members of the Portuguese community in Toronto were not the only people who were horrified at the circumstances surrounding the death of Emanuel Jaques. Politicians such as the Premier of Ontario, William Davis, the Mayor of Toronto, David Crombie and others strongly reacted against the murder. We had many telephone calls from Portuguese and even more from Canadians, telling us to put pressure on the authorities in order that the whole issue of Yonge Street be solved.
From the very beginning the whole story was overly exaggerated and exploited by the Canadian media which purposely incited the public to react, and react they did through various demonstrations under a highly emotional climate. The road was therefore paved for thousands of people to show up at the demonstration of August 8th, organized by Jose Rafael of the Portuguese Radio Club.
It is our belief however, that the majority of those who participated in the demonstration did so out of simpathy for the family of Emanuel Jaques and out of concern for their own childrens safety. We firmly believe that those people were there for these reasons and not be- cause "they are people thirsty for blood'; for revenge or to have capital punishment reinstated in our system.
To demonstrate against something one does not like is a very natural phenomenon in a democratic society like ours. There were however, Portuguese and Canadians alike who were shocked with the strong and violent tone of the demonstration. We had telephone calls from many Canadians, some of them insulting the community and the Portuguese in general, in a very uncivilized manner, and people of the stature of Gordon Sinclair ridiculing the Portuguese who live in Canada because of such a demonstration. To him and other individuals such as Mr. Larry Bondy who had the courage or little sense of insulting us on the telephone, we would like to tell them that Toronto has 80,000 Portuguese- Canadians (and they are legally here, Mr. Bondy!) who are an integral part of the Canadian society, that a large number of them are Canadian citizens with the entire right to have a saying in the destiny of this country, that they all have children who were born here and will die here
and nobody can prohibit them from expressing their opinions.
There is a possibility that once more the Toronto media, misled by the leaders of the demonstration, made the public believe that such a demonstration had the support of all Portuguese organizations in Toronto, including clubs, social centers, churches and the Portuguese media. Or that all participants wanted revenge and blood as a few placards showed. If that was the impression it was not the reality because 90% of the Portuguese organizations did not officially support the demonstration nor did they agree with the uncivilized behavior of a few individuals.
In our view, which we believe is shared by many thousands of Portuguese Canadians scattered across this country, capital punishment will not solve the problem of crime in any society and it is an uncivilized way of punishing criminals who many times are the victims of the socio-political and economic system. Prostitution, exploitation of sex and violence is unfortunately permitted in many societies through television, magazines and other business enterprises in many disguised forms. Yonge street is just a small example of this type of .sex exploitation which leads into many criminal activities. We believe that the media and its unscrupulous manipulation of crime, politicians and some individuals involved in the demonstration of August the 8th are the ones responsible for the stir up of the Emanuel Jaques' case causing emotions to run high.â€ 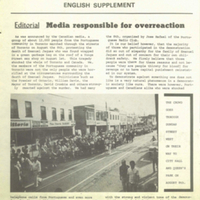